Nowhere to Run, the documentary shot, directed, and edited by my brother Dan McCain at Core Productions, Lagos, narrated by Ken Saro Wiwa Jr., and featuring Nigeria’s leading environmentalist Nnimo Bassey of Mother Earth Foundation,  (with a script written by Louis Rheeder and myself) just won the award for best short documentary at The African Film Festival (TAFF), Dallas. It had been nominated for three awards, Best Short Documentary, Best Director, and Best Cinematography. So I got up this morning and searched twitter for it. Amara Nwankpa, representing the ‘Yar Adua Centre (which produced the film) at the festival, tweeted the news.

It has been gratifying to see the film get so much attention. Back in April, it won the Grand Jury prize at the Green Me film festival in Lagos, and it has had a pretty steady stream of screenings in Nigeria and an increasing number abroad since it premiered in November 2015. There are five more screenings this week in Abuja; Washington, DC; and Linden, NJ. See this link or the bottom of this post for more details.

In the past month I have also been a part of two other screenings in Nigeria, one at Kwara State University, Malete, as part of the 2016 convocation events and the other at the American Corner in Jos. 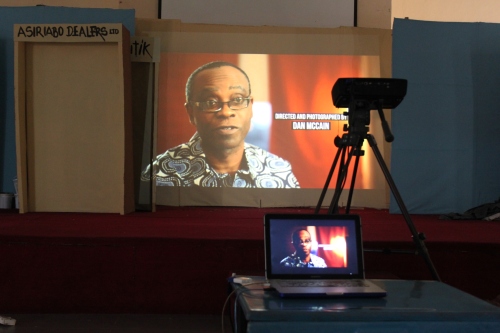 Nnimmo Bassey on screen, at the Kwara State University, Malete, screening of Nowhere to Run, 3 June 2016.

Professor Osofisan spoke after the screening, pointing to the long history of environmental abuse and activism against it in Nigeria. Osofisan’s contemporary Ken Saro Wiwa was one of Nigeria’s most outspoken activists and critics of the degradation of the Niger Delta and was executed on trumped up charges under the military regime of Sani Abacha. Now his son continues the struggle.

Tanure Ojaide, the author of multiple volumes of poetry which speak to the environment, also spoke to the importance of environmental issues in Nigeria.

Saeedat Aliyu speaks about rampant littering on university campuses after the Kwara State University screening of Nowhere to Run.

Sadly, the university buildings are also contributing to some of the issues spoken about in the documentary. In the film Michael Egbebike points out that erosion is caused by blocking off water ways and as I walked to my office after the screening, I saw how the new walls built all over the KWASU campus were built without proper drainage and were creating small ponds next to buildings. 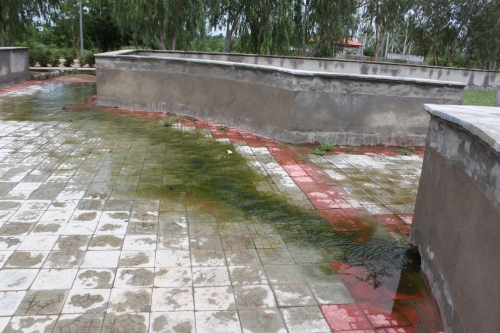 While this is a relatively small problem that affects only one institution, it illustrates how poor planning and bad construction practices all over the country are contributing to much larger environmental issues.

In Jos, on 28 June, there were over 35 people crammed into the screening room at The American Corner.

Many of them were young people involved with community organizations, and some of them were people who had simply heard about the film and wanted to come. The audience discussed the complexities of bringing about change to how humans affect the environment. One of the most striking comments came from a man who owns a wood selling business. He spoke movingly about how he was terrified about what was happening to Nigeria and he did not want to contribute to deforestation, and yet his family business and income depends upon wood. The family bought a piece of land in a swamp to try to farm trees for use in their business, but he said the people in the neighbouring village would come at night and cut down their trees.

Voice of America journalist Ilyasu Kasim spoke about a recent story he had done about coal production. Coal production destroys a large number of trees and is dirty energy, and yet some of the poorest people in Nigeria are dependent on this industry and it provides necessary heating for people in Jos, who would otherwise freeze during harmattan. What do these people do in an increasingly devastated economy when people are already having trouble eating? Perhaps fast-growing bamboo could be used in some instances where wood is used. Furthermore, steady electricity would likely help with the problem of heating in Jos and in creating job opportunities. This led to questions of government responsibility  versus the responsibility of individuals. Obviously, the government needs to do more in enforcing laws already on the books and in improving power supply, but if individuals do not get involved then there is no hope at all.

Upcoming screenings in Nigeria this week include two screenings at the One Environment conference in Abuja, which is holding at Thought Pyramid Arts Centre, 18 Libreville Street, Wuse II, Abuja. It will be shown (tomorrow), Tuesday, 5 July, at 3:30-5pm, and on Thursday, 7th July, at 2:30-4:30pm.

This week it will also be screened in the United States in Washington, DC, first on 6 July, Wednesday, at the International Republican Institute, 1225 Eye Street NW, Suite 800, Washington DC, at 2-4pm. To register for the event, click here.

It will also be screened at the Nigerian Embassy in Washington, DC, at 3519 International Ct. NW, Washington, DC 20008, on Thursday, 7 July at 6pm. To RSVP please respond at this link.

Next week, on 11 July, the film will be showing at 12 noon, at the University of Ibadan, Draper Hall, as part of the IFRA-Nigeria Post Cop21 Conference “Ecological Crises in Nigeria.”

The film will be playing at other film festivals around the world and continuing to screen in both Nigeria and abroad in the next year.

To stay updated on upcoming screenings, check back regularly on my screening schedule post. And to watch the trailer, check it out here:

I was just doing some browsing and came across this Wikipedia article about the winners of the 2016 Africa International Film Festival. Nowhere to Run won “Best Documentary Film” there. I am so delighted by this image of my brother’s name right next to one of my favourite films Green White Green, etc