The McCain family in Gatwick airport 8 September 1988 on the way to Lagos.

My dad reminded me this afternoon that today marks the 25th anniversary of the day our family moved to Nigeria. My parents have lived here ever since, first in Port Harcourt for three years from 1988-1991, and then Jos up until today. We kids “grew up” here and have been back and forth ever since. My brother and I both currently live in Nigeria, while my sister lives in the U.S. where she is doing her residency as a doctor.

I kept a diary at the time, but it is in storage somewhere now, so I’m relying on memories and my dad’s journal. I may write a little more on this later [UPDATE 14 September 2013, see my column about this topic here], but for now, I will just post a few photos of our move. We had left the U.S. from Atlanta a few days earlier (the first time out of the U.S. for my brother, sister, and I).

Our grandparents and our Uncle John, Aunt Miriam, and our little cousin Karen came to see us off at the Atlanta airport. Here we are in airport’s chapel.

We spent three days in London being tourists.

On the train from Gatwick into London. 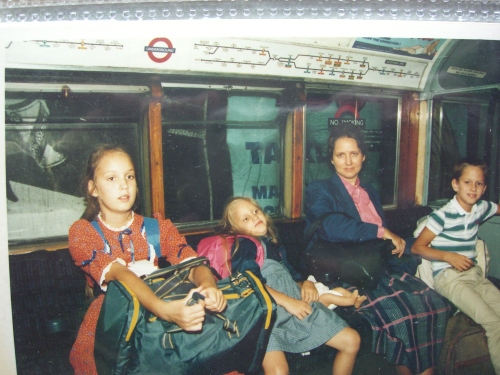 By the time we made it to the Tube, we must have been pretty jetlagged.

While we were in London, we visited our Aunty Lily. My great grandmother had been a World War I bride from England who married my great grandfather–an American soldier– and moved with him to Florida, so we visited her younger sister on our way through London. She served us a very proper British tea, including cucumber sandwiches, and a very rich almond cake, which I’m sure now I would love, but which at the time I thought was disgusting. I remember that her house had a toilet with a very high tank that you flushed with a chain. 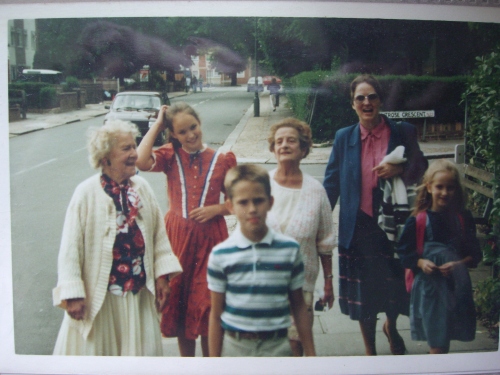 With Aunty Lily and her neighbour

We walked from her house to the guest house where we were staying, but it took a lot longer than we thought it would. I ended up carrying my sister on my back, while my dad carried my brother. My dad says that I took the whole thing as an adventure.  The next day, we went to Madame Tussaud’s wax museum, Buckingham Palace, and walked over the quite ordinary London Bridge, which nevertheless has a great view of the more dramatic Tower Bridge. The next morning we left out of Gatwick to travel to Lagos.

We landed in Murtala Muhammad Airport in Lagos on the evening of 8 September 1988. My memories are vague, but I remember the scent of Lagos airport, a moist stale smell from rains and probably old carpet, and I remember we were met by soldiers at immigration (sent by the university liason office–this was during the Babangida regime), waiting for our luggage to come under the grey flourescent lights. The hotel we stayed in had blue bedspreads, buckets in the bathroom, and a toilet to which the seat was not attached. Our food arrived around 11:30pm, rice and stew and plantains. My dad tells of how relieved he was when he arrived later from the airport with all of our luggage and found us jumping on the beds. While normally we probably would have been scolded for that, it demonstrated that we weren’t too traumatized by the move.

We flew to Port Harcourt the next day, 9 September 1988, where we were hosted at a university guest house for a few weeks before we moved into our bungalow on campus.

Our family in the university guest house, together with a Fulbright family.

In the guest house, I am busy writing in my diary my first impressions of Nigeria. The diary is somewhere in storage now.

The university accommodated us in a three bedroom bungalow, which became our home for the next three years until we moved to Jos in 1991.

Together with some of our closest friends in Port Harcourt, the Nwators, in front of our house.

After moving into our house, a few weeks after arriving in Port Harcourt, we began school at the university staff school. 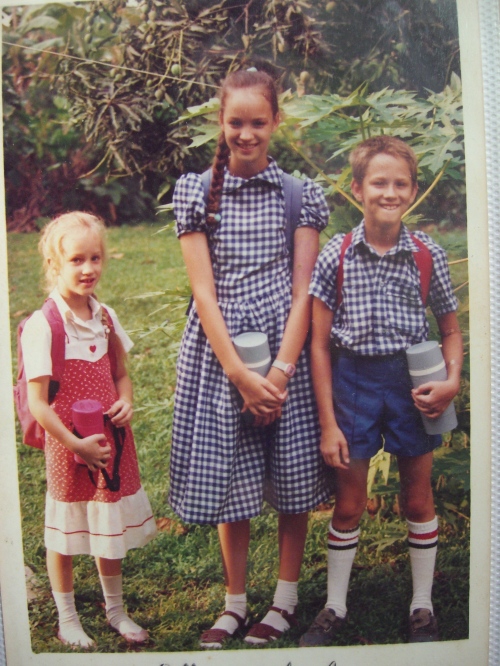 So, now twenty-five years after we first moved to Nigeria, four of us still live in Nigeria. My sister was able to come visit for Christmas last year, and this is the most recent photo of us all together in Nigeria outside our house in Jos.

I will try to write something more “literary” about this in the future. But, in the meantime, I am reflecting on how what was supposed to be a 4 year stint turned into 25 years. Nigeria has become home.

UPDATE: 14 September 2013. In my column this week in Weekly Trust, I wrote another piece with more details.

This entry was posted in personal and tagged 25 years in Nigeria, Jos, Port Harcourt. Bookmark the permalink.