This Wednesday, November 20, 2019, Charles Etubiebi will perform a one man show adaptation of Africa Ukoh’s play 54 Silhouettes at the United Solo Theatre Festival in New York. (You can buy tickets here).  54 Silhouettes is the first Nigerian play to feature at the the world’s largest solo theatre festival, which is celebrating its tenth anniversary this year. [UPDATE: And the play was honoured with Best International Show at the festival.]

The satirical 54 Silhouettes explores with both hilarity and gut-punching conviction the double bind of an actor, Victor Chimezie, who hopes to break through to a major role in Hollywood but finds himself cast in yet another poorly written stereotypical film about Africa. The play is a sly critique of Hollywood but also a self-reflexive examination of African performers who enable such representations.

To attend the event, here are the basics:

I reviewed the premiere stage performance of 54 Silhouettes in 2013 for the Daily Trust.

The play was originally produced for radio on BBC after coming first runner up in the 2011 BBC African Performance competition, and being awarded a Stratford East/30 Nigeria House grant.  I didn’t know anything about the play before I showed up at the Alliance Francaise in Jos where I had seen it advertised in November 2013, but I was blown away by it. I had seen very little Nigerian theatre set in the contemporary moment, and this was fresh and urgent and original. In particular in my review, I highlighted the performance of Charles Etubiebi who played the part of the British-born actor Kayode Adetoba.

Sparks also fly between Chimezie and Kayode Adetoba (brilliantly played by Charles Etubiebi), the Brighton-born British-Nigerian actor whom everyone calls Tobi. He speaks with a South London accent, mispronounces Chimezie’s name just as Larry and Flynn do, and when he plays a warlord speaks with what internet critics call a “generic African accent.”

It seems appropriate, therefore, that Charles Etubiebi, whose performance I so admired in the original stage play,  is the actor to play all five parts in the solo adaptation, and who often refers to the importance of accent in interviews about the play, as does the playwright Africa Ukoh, whom I recently interviewed for Brittle Paper. Etubiebi explains to Noah Tsika in this fantastic interview for Africa is a Country how after being invited to the NEAP Fest theatre festival in Brazil, he asked Ukoh to adapt the play into a one man show, which he then performed in Rio de Janeiro and at several different festivals in Lagos. Here are two videos from his performances in Lagos where, Etubiebi talks about  the background to the play.

And on BBC pidgin:

Having previewed the Lagos show on YouTube, I think it is the tightest and best version of the play that I’ve encountered. It is a really an outstanding performance that speaks to the creative synergy between Charles Etubiebi, as a performer, and Africa Ukoh, as a writer and director.

LADIES AND GENTLEMEN ITS HERE!!!! On stage this Saturday and Sunday in Lagos, in the one-man adaptation of Africa Ukoh's 54 SILHOUETTES, Charles Etubiebi is: Victor Chimezie! Sonny Chuks! Larry Singer! Howard Flynn! and Kayode Adetoba! What happens when your ambitions clash with your ideals? What path will you take? When a struggling Nigerian actor in Hollywood gets his shot at fame and fortune it seems his life's work is finally paying off, but then he discovers this dream job is exactly what he swore to never do: one of those "war in Africa" films. Come have a great night out at the theatre! Date: 18 and 19 May, 2019. Venue: Freedom Park, Broad Street, Lagos Island. Time: 7pm. Tickets: N3000.

In the interview with Noah Tsika, Etubiebi describes his working relationship with Ukoh:

We got accepted to the Lagos Theatre Festival, which is run by the British Council. We performed [54 Silhouettes] there, and this time Africa came to Lagos and directed it himself. And this is when I most enjoyed the performance, because when you work with someone who actually created the thing … Working with Africa, we have a special dynamic. We ate the play, we talked the play, and when we did it in Lagos, at the festival, I genuinely enjoyed being this character, and telling this story. It was absolutely amazing.

As an actor, I know that I’m supposed to cry on demand, but I don’t do that easily. But the last rehearsal we had [in Lagos] … there’s a scene where the main actor gives this monologue about how we as Africans have to confront stereotypes of Africans—what people see from far off. They say, “Let’s just put them in a box and leave them there.” No, we’re more than that. We’re like every other person. Before you can get to know us—who we really are—you have to really look. Don’t just chalk us up as “black Africans”—first of all, in Nigeria, we have many languages. Let’s just start there, first of all. So we’re a lot more than you see. Africa’s a big continent. Those lines [in 54 Silhouettes], about how we need to educate and reeducate the world about who we really are—at the last rehearsal, I got emotional. And Africa said, “You’re ready.”

Since Etubiebi began to perform the one-man version of the play, the play has also been picked up for other dramatic readings, presented by Etubiebi’s Theatre Emissary partner Taiwo Afolabi at the Puente Theatre for the Spark Festival in Victoria, British Columbia and an African Voices event at the Roundhouse Theatre in London. London-based reviewer Nick Awde writes that 54 Silhouettes offers an “incisive slice of Nigeria while simultaneously channeling David Mamet.”

The United Solo Festival will be the first opportunity for American audiences to see this striking performance put together by two of the most exciting members of a creative cohort of artists that are revolutionizing Nigerian cinema and theatre. Africa Ukoh and Charles Etubiebi both have prestigious film credentials—Ukoh having written two critically acclaimed films making rounds on the recent film festival circuit, Abba Makama’s films Green White Green (available on Netflix) and The Lost Okoroshi, and Etubiebi having acted in films like Steve Gukas’s compelling 93 Days (available on Netflix and on Amazon Prime) and Kemi Adetiba’s King of Boys (also on Netflix). But this feels like an exciting moment for Nigerian theatre as well, where Nigeria’s film industry invigorates and gives new life to Nigeria’s theatre tradition. 54 Silhouettes comments on Hollywood portrayals of Africa, but also reaches back and alludes to the dilemma of Wole Soyinka’s tragic hero Elesin in Death and the King’s Horseman. As I wrote in my review of the stage performance,

In Soyinka’s play, a patronizing colonial district officer Pilkings denounces as savage the tradition of ritual suicide by the oba’s companion after an oba’s death, but in “saving” Elesin he contributes to the death of Elesin’s son Olunde, who takes his father’s place. Chimezie and Larry recite dialogue from the scene where Elesin tells Pilkings, “You have shattered the peace of the world forever. There is no sleep in the world tonight.”

This symbolic tribute to Soyinka’s play resonates throughout 54 Silhouettes: Chimezie, like Elesin, faces great temptation to betray his people for a good life, and the well-meaning Larry, like Pilkings, is so blinded by his prejudices that he undermines (through his writing) the cultures he tries to represent.

Yet, in Chimezie’s turn away from the Hollywood stereotypes of Africa and, perhaps, a turn towards Nigeria’s new wave of theatre and cinema(?), is this the birth of the the unborn left at the end of Soyinka’s play?

If you are in New York, by all means go to the United Solo performance on Wednesday, 20 November, (tickets available here). Charles Etubiebi is already in New York for his performance in a few days.

We're the first ever Nigerian play at the United Solo Theatre Festival so you know you have to catch the show! . It's meta. It's poignant. It's got attitude. It isn't afraid to sting. It's new age Nigerian theatre coming up in New York. . Here's me telling you more about @pensage's award-winning 54 SILHOUETTES. . Date: November 20. Time: 7:30pm. Location: 410 West 42nd street, New York, NY 10036. . For tickets see link in bio. And come see our show!!! . #unitedsolo #unitedsolofestival #theatrerownyc #54Silhouettes #theatre #actor #acting #writing #playwriting #onemanshow #soloperformer #soloperformance

If you are in Nigeria, hopefully there will be other performances soon, but, in the meantime, you may want to check out the published version of Africa Ukoh’s play, which can be purchased at the following bookshops: 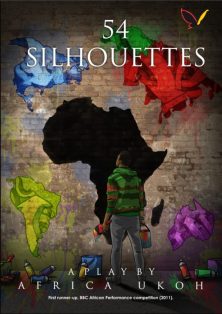 As I’ve also mentioned elsewhere on this blog, Ukoh’s unpublished play Token Dead White Guy was shortlisted for the 2018 BBC International Playwriting Competition. You can read more about it in our conversation on Brittle Paper. Hopefully, this performance of 54 Silhouettes will only be the first of many of his plays to hit theatres in Nigeria and beyond. In the meantime, check out some of the recent films Ukoh has written scripts for: Green White Green (on Netflix), The Three Thieves, and The Lost Okoroshi. I’ve only been able to watch Green White Green so far, but the trailers promise more of what I’ve come to expect from him: smart, funny, and real: