The Sun, the Moon, and a cardboard box

The sun and the moon and me (c) CM

So today there was a partial eclipse. I hadn’t heard about it until I went to lunch with a friend, and in her car, she had armed herself with a box with a piece of white paper pasted on one side and a hole cut in the other, over which she had taped aluminum foil and pricked with a pin. This was her eclipse viewing device, she told me. I had heard about people making these things to view eclipses before. I wasn’t sure I wanted to go to the trouble. But around 2pm, as I sat on my couch reading the Sunday Trust, I looked outside and noticed that the light was long and harsh and strange, so I called her and asked if she was watching the eclipse through her box. Was it happening now? She told me I still had time, as the peak of the eclipse was supposed to happen at 2:40pm, so I went and found an old regulator box and made the same device.

It was not that dramatic as I was expecting. I had thought I might see some sort of photographic image coming through the pin–hole onto the white paper. Yes, people, there is a reason I’m not in the sciences. Instead, it was just a new moon shaped sliver of light, which showed the shape of the moon as it passed in front of the sun. I was too afraid to look up at the sun itself. Next time I’ll have to prepare myself ahead of time with properly treated goggles.

I showed the neighbours, and wandered about looking at it from different angles.

I had some poetic thoughts about it all, but in between going back inside to keep working on my current chapter and staying up too late before deciding to post, the eclipse poetry will have to wait for the next eclipse. In the meantime, here are a few of the photos I took of the sliver of light in my box. Note: there is nothing fancy or dramatic about these photos. I did not risk pointing my camera lens or my eyes towards the light. It’s just a recording of my delightful, dorky afternoon wandering around with a box with a hole taped over with tin foil and paper.

Look for the sun, look for the moon, they are there in the light, in the shadow, in the cardboard box.

The sun, the moon, and an evil forest (c) CM

The sun disappears behind the moon and the trees. (c) CM

The sun, the moon, me and a cardboard box (c) CM 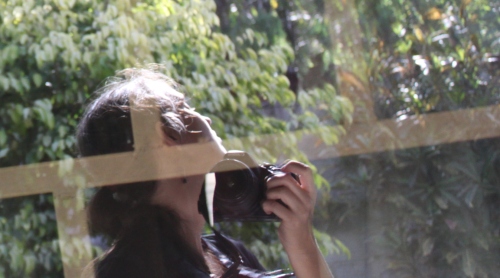