In breaking news, the Hausa director and former gubernatorial candidate, Hamisu Lamido Iyan Tama has dropped his lawsuit for defamation against Abubakar Rabo Abdulkarim, the Director General of the Kano State Censorship Board in exchange for the board’s dropping of charges against him in a case that has dragged on for almost two years.

Iyan Tama called me this afternoon to make sure I had read today’s article by Ruqayyah Yusuf Aliyu in the Sunday Trust, “My stay in prison was a blessing -Iyantama,” and he wanted me to be sure that I pointed out that although he had been asked about being “convicted months in prison” that he had never been actually convicted. Although the mobile court magistrate judge Mukhtar Ahmad had sentenced him to three months in prison and Iyan Tama had served that time, he had appealed the conviction and, although delayed multiple times, the appeal was heard and upheld. The attorney general of Kano state, according to Leadership reporter Abdulaziz A. Abdulaziz:

said the trial was “improper”, “incomplete”, a “mistake” and requires retrial before a more “competent magistrate”.

“I am not in support of the conviction in this trial”, said the attorney-general, “It is obvious that the trial was not completed before judgement was delivered but there and then the presiding magistrate went ahead and delivered a judgement”, he added.

The judge called for a retrial. Again according to Abdulaziz A. Abdulaziz in Leadership (unfortunately Leadership has taken down the links to its archives, but I have it quoted here on my blog). Iyan Tama went to a Kaduna appeal court to appeal the retrial, since he had already served three months in prison, and there had been multiple delays. The case was still in court until apparently this week when he reached a settlement with the Kano State Censorship Board, during a hearing for his lawsuit against the Director General of the Kano State Censorship Board, Abubakar Rabo Abdulakarim, for alleged defamation during an interview with DITV in Kano, in which Rabo apparently claimed Iyan Tama had not registered his company with the appropriate bodies. According to Abdulrahmane Tonga reporting for Leadership,

The DG was dragged before the court by Iyan-Tama, who alleged that he had defamed his character in a television interview he granted DITV Kaduna earlier this year, when he allegedly stated that Iyan-Tama Multimedia was not formally registered as a moviemaking business enterprise.

Tonga continues with details of the continued court case, including that Rabo, who had previously refused court summons to lawsuits in Kaduna, finally showed up:

The court had sat twice without Rabo, before it subpoenaed him to appear in person after a request from the plaintiff’s counsel, Barrister Muhammad Sani Katu of solicitors Mamman Nasir and Co.

Rabo, who appeared to be limping yesterday, arrived the court at 9:05 a.m. in a Toyota bus belonging to the Kano State Ministry of Justice. He was accompanied by two state counsel, Rabi Waya and Sanusi Ma’aji, as well as the chairman of the censorship board, Malam Rabi’u.

He had never answered a court’s summons in the many legal cases filed against him by various movie practitioners in Kano and Kaduna during the past three years since he was appointed by Governor Shekarau to sanitise the film industry.

For more details of the “hot words” exchanged between the lawyers of the two parties, read the rest of Tonga’s article.

According to the interview with Ruqayyah Yusuf Aliyu in today’s Sunday Trust, Iyan Tama said that

The resolution was reached as a result of consultations between my lawyers and that of Rabo where some terms were agreed upon. After we filed the case before a Kaduna High court over alleged defamation, claiming N10 million damages and Rabo failed to appear during the first two sittings saying his security needed to be guaranteed, my lawyer prayed to the court that it was important the defendant appeared and the court granted the plea by way of ordering that Rabo appeared while it guaranteed his security. […] My lawyer insisted that if I will have to withdraw the case, the censorship board will also have to withdraw its case against me which has been pending for quite a while at a Kano magistrate court.

According to Iyan Tama, the terms of settlement were as follows:

The first was that my company, Iyantama Multimedia was registered as a business name [… with] a certificate of registration KN/0010927 dated the 16th day of December 1997. The second term was that the defendant’s statement that led to the suit was based on a search report made at the corporate Affairs Commission for a limited liability company, and thirdly, that the parties in the suit have in pursuance of the pre-trial conference conducted on the 28th day of September, 2010 resolved to terminate the suit and the criminal case pending before Chief Magistrate Court 7, Nomans Land between the Kano State Censorship Board and Iyantama with case number KA/CMC/28/08.

was not operating illegally. I am happy that the world now knows that Iyantama has been operating legally since inception in 1997. 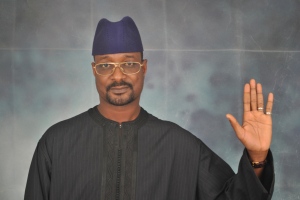 Iyan Tama also talked extensively on the events leading to his imprisonment and his experiences in prison.

Being a filmmaker, I was amazed by every single little thing and therefore made friends with other inmates. I was more like a journalist in prison; I carried out series of interviews with the inmates from which I was able to gather dozens of ideas from which I am currently working to put into films. […] That is why I said being in prison has turned out to be a blessing to me and I never regretted it.

I was not able to find a link to the Sunday Trust article online, but I have scanned in a photo of the article on flickr. If you click on the photo below, it will take you to a version large enough to read onscreen.

"My stay in prison was a blessing--Iyantama" interview with Ruqayyah Yusuf Aliyu in the Sunday Trust, 17 October 2010

The Iyan Tama case has been one of the ones I have followed most closely on this blog, since he was imprisoned at the end of December 2008. For a list of articles and posts I have written related to the case, see the following links:

On the Current Censorship Crisis in Kano, Nigeria, 13 January 2009

Triumph/Trust Editorial Convergences (a piece that looks at editorials written about Iyan Tama that claim that his company was not registered with CAC), 29 January 2009

Interview with Alhaji Abubakar Rabo Abdulkarim, Director General of the Kano State Censorship Board (in which he discusses the Iyan Tama case), 13 February 2009

Updates on the Iyan Tama Case and other articles on the crisis in Kannywood, 14 March 2009

The Latest on the Iyan Tama Case from the Nigerian News Service, plus new fees from the National Film and Video Censor’s Board, 2 October 2009

FIM Magazine Editor Arrested on the Accusation of Abubakar Rabo Abdulkarim, DG of the Kano State Censor’s Board, 4 July 2010

Iyan Tama Takes Rabo to court over defamation, and other lawsuits, 18 August 2010