I had the privilege to attend the 2016 Kannywood Awards held at the NAF International Conference Centre in Abuja  Saturday, 12 March 2016, the third incarnation of the awards organized by Sarari Klassique Merchandise and Halims Entertainment Galleria. (See my post on the 2013 awards.) I was impressed by the space, which was in a well-decorated and sophisticated auditorium. The red carpet TV presence included Rayuwa TV, Noma TV, Unity Entertainment, NTA, VOA, Voice of Nigeria and others.

on the red carpet.

I dislike taking pictures in conference settings under muddy lighting, and the flash on my camera is broken. Therefore, almost all of my photos are pretty bad. I’ve seen some amazing ones on Facebook taken by photographers like Sani Maikatanga. You can see more photographs at Kannywood Scene. I’ll post a few here, mostly for people who asked for copies. 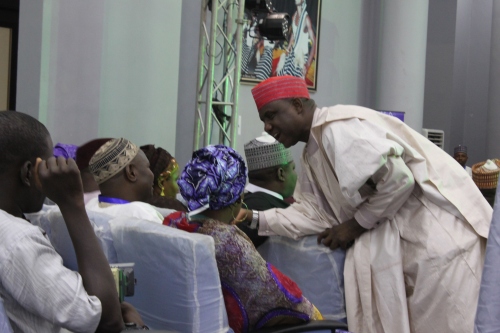 Director of the Kano State Censorship Board, Afakallah at the Kannywood Awards, 12 March 2016. (Quite a change from Rabo…)

The awards were MC-ed by Waziri Zuaibu of NTA, and Aisha Mohammad of the EFCC (!). Memorable moments include a tribute to the late Aisha Dan Kano; a stylishly-dressed Nafisa Abdullahi’s touching speech thanking her mother after she won Best Actress for her role in Baiwar Allah, and Sadik Sani Sadik kissing the ground when he received his award for best actor in Bayan Duhu, a 20+ minute speech (I was recording) by the minister of Information, and a short and sweet speech by Professor Abdalla Uba Adamu, Vice Chancellor of the Open University, following a really fantastic little 3-4 minute documentary on the beginnings of Kannywood.

I was impressed by the efforts to make this a unified Nigerian affair. Indeed the theme was “Patriotism through Entertainment.” In the musical soundtrack, I heard (pre-recorded) music by Ziriums, Sani Danja, and Jeremiah Gyang (a Christian Hausa singer.) There was an opening prayer by a Muslim and Christian, and, in addition to the various ministers and representatives of governors, there were representatives from Nollywood and even of an Ijaw youths association. Emeka Ike, the president of the Actors Guild of Nigeria gave out awards and spoke out saying that the stakeholders meeting recently held in Lagos (which invited no one from Kannywood) had been “hijacked” by outside interests. In one of the musical performances, Sarkin Waka sang “Mu Zauna lafiya, we are one,” and was joined on stage by many of the stars.

There were also performances by  Ziriums, Abbas Sadiq, and Nura Bond. 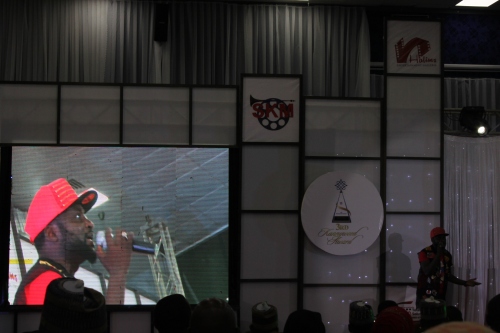 Three special awards were given at the beginning of the ceremony: The special Kannywood Merit Award, went to His royal Highness Malam Awwal Ibrahim, the Emir of Suleja; a Posthumous Life Achievement Award went to the late Tijjani Ibraheem; and another Kannywood Special Merit Award went to Malam Sunusi Shehu Daneji, a scriptwriter and magazine publisher who coined the term “Kannywood” in 1998.

Although certain moments like the (actually quite informative) speech by the Minister of Information dragged on, the audience kept themselves amused with photo taking,selfies, and wandering around chatting.

The winners of the awards (alongside the other nominees) are as follows: 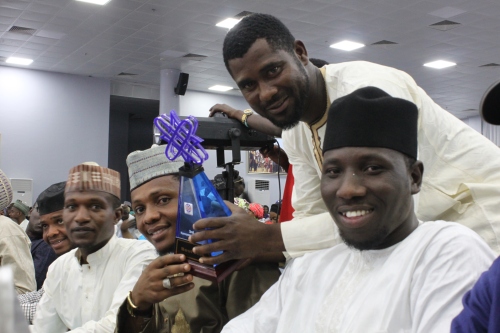 The Minister of Information presents the Best Actress Award to a teary Nafisa Abdullahi, 12 March 2016.

Adam A. Zango, for Gwaska

Adam A. Zango, for Hindu 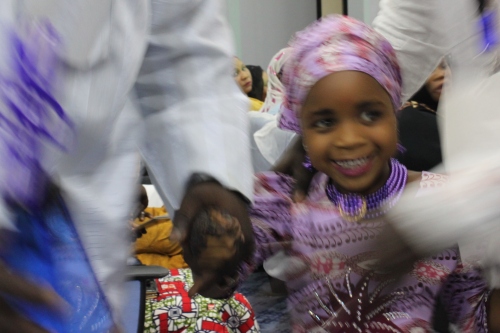 At only five years of age Maryam Baba Hasin wins best Child Actor Award for her role in Basma. 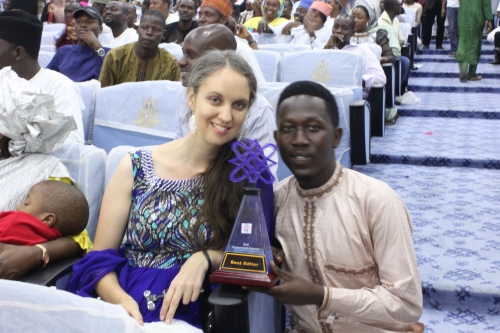 Ali Artwork poses with his award for best editor and me.

Suraj A. Ibrahim and Mustapha Auwal, for Gwaska -WON

Tahir I. Tahir, for Hindu – WON

Saif A. Nuhu and Ishaq Ahmad Nuhu, for Halacci

Jibrin Cha, Sunusi Shamaki, and One Eye, for Hindu -WON