I am working right now on a dissertation chapter on spectacle in Hausa films and currently on the “music video” portion of it. I actually had to come to my blog to find one of the songs I wanted to look at, as it seems to have mysteriously disappeared from my computer. Here it is. The cinematography is rather boring, but the song (seen alongside the film) is brilliant.

In the meantime, Weekly Trust did not post my column on my WT page this week for some reason, so at the request of Twitter followers, I am posting it here on my blog. It has actually been three years since I started my column in Weekly Trust, and, though I have sometimes turned in late, sleep deprived and occasionally incoherent articles that I am less than proud of, I have actually never missed a week since I started–even when deathly ill! So, if you check my Weekly Trust page and something is missing, get in touch with me and I will try to post it on this blog. This week was kind of an index to what I have written this year, which may be why WT didn’t post it. I will include links below, so that if you missed reading something this year, you can find it here.

Last week marked the third anniversary of this column “My Thoughts Exactly,” which I began writing on 16 October 2010. Last year, in my second year review, I wrote that I planned “to take a slightly more scholarly turn in the upcoming year while I finish writing my PhD dissertation.” I’m not sure if this year was more scholarly, but it did become more literary, as I focused more on reading, libraries, and a lot of book reviews.

Auri Jahila? which has not been translated, but, if the letters I received are any indication, is one of her readers’ favourites. I also examined the politics surrounding the reception of northern Nigerian and Hausa literature in a piece that reviewed the 7th conference on Northern Nigerian Literature at Bayero University in December 2012 and a celebration held the next weekend for Hausa literary critic and translator Ibrahim Malumfashi. Later, I reviewed the October 2013 issue of the online translation journal Words Without Borders, which focused on translations of works by African women writing in African languages and included Professor Malumfashi’s translation of the first chapter of Rahma Abdul Majid’s novel Mace Mutum. I wrote one piece on my vacation reading over Christmas 2012, and another topical review looked at the performance of three Nigerian plays, a workshop performance Banana Talks, Femi Osofisan’s play Midnight Hotel, and Wale Ogunyemi’s play Queen Amina of Zazzau, during the 7th Jos Festival of Theatre by the Jos Repertory Theatre.

The Caine Prize for African Writing this year was a treat to write about, as the 2013 shortlist featured four Nigerians. While the previous year my friends Abubakar Adam Ibrahim and Elnathan John were unable to attend the Caine Prize workshop to which they had been invited in South Africa because of the yellow fever vaccination row between Nigeria and South Africa, this year both of them were shortlisted for the prize. I briefly reviewed all five shortlisted stories [that was a sleep-deprived piece, as I stayed up all night to read all the stories after they were announced and was partially writing during my cousin’s graduation] and was luckily able

to attend the Africa Writes Festival in London, where the Caine Prize events were taking place. In two subsequent columns about the event, I critiqued emerging ideas about African literature, usually coming from writers based in the West, that attempt to exclude narratives of suffering. [A follow-up from my initial piece critiquing Bernadine Evaristo’s manifesto on suffering children last year.] I also followed up on Ngugi wa Thiong’o’s critique of the way literary establishment often awards prizes, that ignore and even exclude African-language literature. [Bizarrely, the South African literary blog Books Live wrote a whole post on my article. I was surprised but gratified for the link!]

The sadder literary events of the year included the death of two of Africa’s literary icons, Chinua Achebe, [I was honoured to be the only non-Nigerian writer included in Weekly Trust‘s piece “How Achebe

Inspired Us, by Young Writers”–my paragraph was pulled, with my permission, from my Facebook page] and the tragic murder of Ghanaian poet Kofi Awoonor in the September 2013 Westgate Mall terrorist attacks in Nairobi. Another tragedy for readers was the suicide of intellectual activist Aaron Schwartz, who had been persecuted by courts in the U.S. for trying to make scholarly materials free and available online.

I often receive emails from readers asking where they can find the books I’ve reviewed. While I often direct them to bookstores in Abuja and Lagos, and online stores like jumia.com, konga.com, and mamuwa.com, I also explored literary resources available online [which WT didn’t post online and I haven’t yet uploaded the hard copy to flickr–I’ll try to do that soon] and addressed the need for better library resources, whereby people who don’t have the money to buy sometimes outrageously-priced books can read them by borrowing. The secretary of Jos Association of Nigerian Authors Onotu David Onimisi told me in an interview (see part 1 and part 2) about the ANA project to develop a community library in Jos. He directed me to the excellent American Corner library in Jos which is open to the public and is currently hosting the ANA library while they build another location. I also interviewed Kinsley Sintim who during his NYSC youth service started a community library in Tasha outside of Abuja and has been able to get a massive number of donated books for children in the community. (See Part 1, Part 2, and Part 3. I really should have edited it down to just two parts, but I was travelling….] For a comparative perspective, I interviewed an old college classmate Elizabeth Chase, who is a senior librarian at a library in Frisco, Texas. I shared some of the feedback I’ve received about my “literary pieces,” in an August readers column.

I also reviewed a few films: Hamisu Lamido Iyan-Tama’s Hausa-language film Kurkuku that revisited his trials at the hands of the Kano State Censorship Board in 2008-2010; the English-language documentary Daughters of the Niger Delta, made by nine women about the struggles of women living in the Niger Delta; and Dul Johnson’s Tarok-language documentary There is Nothing Wrong With My Uncle, which examines Tarok burial customs. I interviewed director Hafizu Bello, who won the Africa Magic award for the best Local Language film in Hausa for his film Fa’ida in March, and director Husayn Zagaru AbdulQadir (part 1, part 2 wasn’t put up by WT), who won a federal government YouWiN! Award to expand his Kaduna-based production company New Qamar Media. I wrote about visiting the set of the film Bakin Mulki in Jos and responded to Aisha Umar-Yusuf’s blanket scapegoating of the film industry for Nigeria’s social woes. [I am loathe to link to it–it’s currently at only 303 hits–but if you want to see what I was responding to, her piece is here.]

A few of my topical pieces were “Christmas in the Age of Massacres” and a piece that reviewed “The Good Things of 2012” in what was an otherwise very sobering year. Last November, I questioned Christian Association of Nigeria president Ayo Oritsejafor’s acceptance of a private jet as a gift from his church, pointing to scriptures that challenge the accumulation of earthly wealth. My review of Balaraba Ramat Yakubu’s Wa Zai Auri Jahila? was a response to the child marriage controversy sparked off by Senator Ahmad Sani Yerima’s insistence that puberty should be the only determining factor in marriage age. “Weeping at Night, Waiting for Light” before Palm Sunday addressed the bomb in the Kano car park and attacks on schools and a church in Borno and Kano. Most recently I have written about the parallel terror attacks on Benisheik, Baghdad, Nairobi, and Peshawar, and the attack on the College of Agriculture in Gujba.

I delved into my personal history in a tribute to Chinua Achebe, writing about the influence he has had on my life. I also later wrote about my family’s 25 years in Nigeria. I bid goodbye to a few friends 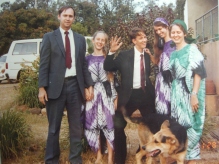 The McCain family sometime in the 1990s

this year: Hausa film director Balarabe Sango, who passed away in December 2012, and an old schoolmate Dr. Rachel Horlings, one of only three underwater archeologists working off the coast of West Africa, who was killed in Elmina, Ghana in a freak electrical accident. In  “As the Rains Begin” I linked tragedies to the rhythmic seasonal motion of the earth, celebrating the birth of a baby born to a friend who lost her husband the year before.

I was fortunate to host several guest columns this year. Dr. K.A. Korb, currently Head of the Department of General and Applied Psychology at the University of Jos, contributed three pieces, one challenging the perception that teaching is a last resort career by interviewing several dedicated and passionate teachers. She also contributed a two-week column on post traumatic stress disorder and the effects that it is having on people in northern Nigeria. Egyptian writer and journalist Nadia Elawady allowed me to reproduce her piece linking the Boston bombing to the tragic events unfolding in Egypt [here is the WT link, and here is her original piece on her blog). Scholar Hannah Hoechner, who has done research with almajirai in Kano, responded to the proposed ban on almajiranci in Kano.

Thank you for reading this year. If you missed any of these pieces or want to read any of them again, you can find most of them under the “My Thoughts Exactly” tab on the Weekly Trust website. I am trying to push through to the end of my PhD dissertation this year, so I will likely continue to feature guest columns and more “academic” material as I try to close this chapter of my life. I love receiving emails from readers, so please keep sending your feedback. Thank you.